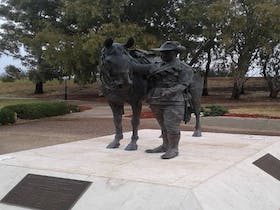 A tribute to the men of the ANZAC corps who served in the Boer, Sudan and First World wars, the Waler Light Horse memorial statue is located in Tamworth’s Bicentennial Park and depicts an Australian World War I trooper saying farewell to his Waler horse in the deserts of the Middle East.

Between 1861 and 1931, approximately 500,000 horses were exported from Australia to the Indian Army, the Boer War and Egypt with The Australian Light Horse as remounts. Of these horses, only one returned, a gelding Sandy belonging to Major General Sir William Bridges. The Trooper’s uniform and the military saddler on the horse are based on original WW1 equipment. Designed and sculpted by a talented artist, Tanya Bartlett of Newcastle, NSW, the bronze memorial was unveiled and dedicated on 29 October 2005 by well-known and respected, retired Army Major General WB Digger James AC, MBE, MC. The monument is a feature of ANZAC Day ceremonies and other army commemorative services.