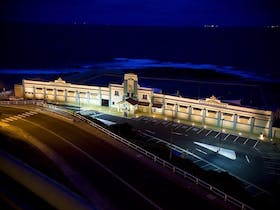 With its distinctive and architecturally significant Art Deco pavilion, Newcastle Ocean Baths is one of the city’s outstanding historic landmarks and is a popular informal open-air studio for amateur photographers.

The Ocean Baths were constructed and in use before World War One, though not formally opened until the 1920s. The baths’ popularity has never waned throughout the ensuing decades, and thousands of Novocastrians remember it fondly as the place where they first learned to swim. Construction began in 1910 with the construction of the pavilion beginning in 1922.

The Newcastle Ocean Baths are opened all year round, subject to maintenance and cleaning. Cleaning is done every Wednesday.