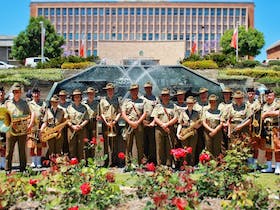 With only a short break from service after World War Two and under various names and configurations, the Australian Army Band Newcastle has existed as Newcastle and the Hunter region of New South Wales’ own Military band since 1861.

The band members are drawn from the local community who, in addition to their civilian vocations, are talented musicians employed on a part-time basis by the Australian Army.

The band’s main job involves the support and promotion of the Australian Defence Force units within the Hunter region of NSW though they are also very active in community development and support.

The band comprises ensembles from quartets to a full military band and performs music from all genres to suit any occasion. It also features a Pipes and Drums section making it a very versatile package.

Members of the Australian Army Band Newcastle enjoy the privileges of being an Australian Army musician, a part-time job that offers amazing performing opportunities both domestically and internationally.