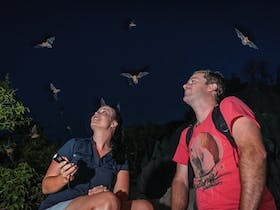 Limestone outcrops and dense, decorated caves are roosting sites for more than 80% of Australia’s breeding population of little bent-wing bats. The park is also one of the few places in Australia that supports a colony of vulnerable ghost bats.

The area was once submerged by a shallow sea and has been alternately shaped by, and then starved of, water. Limestone from ancient coral reefs formed the rocky karst seen today.

The Archer Brothers, who settled in the Rockhampton area in the 1850s, named Mount Etna after the volcano in Sicily. From 1914 to 1939 the caves were mined for guano, and from 1925 for limestone. During World War II, commandos also trained here.

Explore the park on foot and have a BBQ picnic in the day-use area. In summer, join a ranger-guided tour to Bat Cleft and experience the rush of thousands of tiny bats flashing past you (fees apply). Tours run for about three hours in the evening under torchlight along the Mount Etna walk (2.4km return). Tours operate every summer from December to February on Monday, Friday and Saturday evenings.