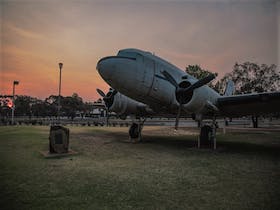 The Douglas DC3 Dakota is located in Lions Park on the junction of the Newell and Mid Western Highway’s, West Wyalong. Built in 1943 in Oklahoma City, the plane was donated to the West Wyalong Lions Club.

The designation ‘DC’ stands for ‘Douglas Commercial’. Production of civil DC-3s ceased in 1942, although military versions were produced until the end of the war in 1945. The DC3 is the world’s most successful commercial aircraft with 10,928 examples being built.