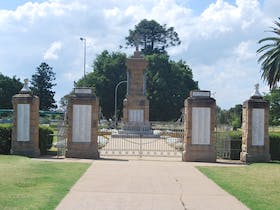 A Celtic cross tops the impressive 10.7 metre high sandstone and granite monument serving as a grave for 122 Warwick men who died in WWI.

Governor Sir Matthew Nathan unveiled the memorial 5 December 1923, before a crowd of 3,000.

Sir Matthew expressed pleasure at the involvement of a returned soldier, Roy Campbell, in the memorial’s design although he may have collaborated with his father Hugh.

The memorial, which cost £1445, was crafted by Ipswich mason Frank Williams.

Its classic elegance incorporates Corinthian columns of polish granite and a sandstone shaft with carved wreath and the words ‘The Honoured Dead’. Names are recorded on marble plates.

Memorial gates, also designed by the Campbells and installed a year later, pay tribute to the 377 Warwick district men who served and returned.

The Warwick war memorial is found in the south-east corner of Leslie Park, named after a pioneering family of the district.